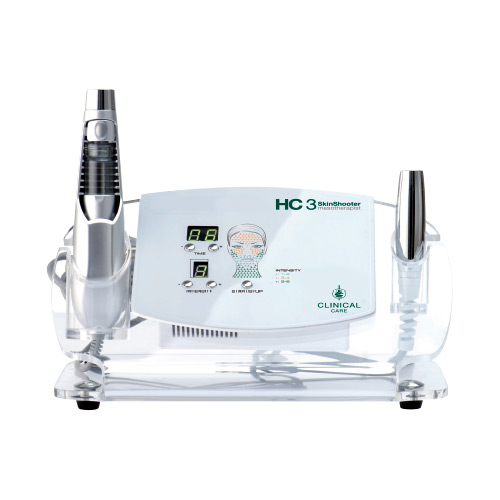 Mesoporation paves the way for a smooth, healthy and beautiful skin

The SKINSHOOTING method counteracts skin deficits such as wrinkles, swellings, sagging and pigment disorders with effective ingredients. These target the skin where they are most needed with a slight tingly sensation and otherwise painless. To optimize the effect, continue the treatment at home with a very special Clinical Care serum by using it to dampen your skin in the morning and evening.

I want more info about HC3 and mesotherapy

In mesoporation or needle-free mesotherapy, highly concentrated active in¬gredients are introduced into the deeper layers of the epidermis. The HC3 SkinShooter emits electrical impulses that temporarily open the aqua¬porin (also known as water channels) and allow the active ingredients to penetrate deeper.

The HC3 SkinShooter-matched serums are virtually shot into the skin via the Compact Pistol (the handpiece of the HC3 SkinShooter). The intensity of these needle-free injections can be easily varied, so that the meso-poration can be applied as effectively as possible on the forehead, the cheeks and neck, the mouth and jaw area as well as on the décolleté. Since the skin’s own protective barrier can be overcome with mesoporation, the efficiency of the incorporated active ingredients resulting from the method is immense.

In classical mesotherapy, the transport channels for the active ingredients are realized with the help of needles, but the skin is injured in the process. In contrast, painless mesoporation uses its own transport channels, which can be temporarily opened by the electrical impulse without damaging the skin cells in any way. An infection risk is thus completely excluded in pure electrostimulation.

Mesoporation is based on electroporation from biomedicine

In biomedicine, the search for a way to transport large DNA molecules into individual cells was sought. Using a specially developed electroporation device, cell membranes were able to be permealized by means of electrical impulses. The pores in the membrane were opened by the stimulation, through which the DNA molecules could enter the cell. In cosmetology, this method was successfully adapted, which is why mesotherapy is also called meso-electroporation. It uses electrostimulation to deliver active in¬gredients via the temporarily opened aquaporin into the deep layers of the epidermis.

Different serums and active ingredients make it possible for the mesoporta¬tion to cover a wide field of application. The active ingredients can be transported into the skin deliberately when using the Compact Pistol of the HC3 SkinShooter. The duration of the treatment session as well as the number of treatment cycles depend on the defined application target and need to be individually tailored to each customer.